A famous painting by Andy Warhol of China’s Chairman Mao Tse Tung – is going to auction in Hong Kong. 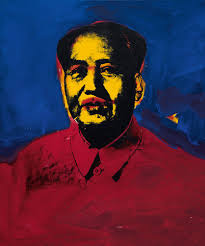 It’s one of a series of silk screen prints by Warhol that immortailized the founder of China’s Communist Party as a pop-art commodity in the same artistic vein as Marilyn Monroe and Campbell’s Soup.

The portrait is based on a photo in Mao’s Little Red Book and is among the most famous images of the 20th century.

The last time this particular Warhol work was auctioned – was in 2014 – going for just under $9.5 million.

The Sotheby’s auction is set for April 2nd.