NEXT ARTWORKS TO SIT ATOP LONDON'S FAMOUS FOURTH PLINTH CHOSEN

The next two artworks to be showcased on the Fourth Plinth in London’s famous Trafalgar Square have been chosen. 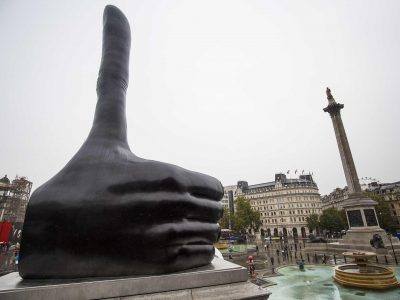 The art platform is currently home to a giant bronze thumb – but the digit will be replaced in 2018 by a recreation of an ancient sculpture which was destroyed by the so-called Islamic State group.

Amerivcan artist Michael Rakowitz will create the statue – from empty date syrup cans – of Lamassu – an Assyrian protective deity in the form of a winged bull.

Then in 2020, Lamassu will be replaced by a giant ice cream sundae topped with a cherry – along with a fly and a drone.

British artist Heather Phillipson’s creation The End has an interactive element – allowing visitors to live-stream the view from the drone on their mobile phones.