ISIS CLAIMS RESPONSIBILITY FOR LONDON ATTACK CARRIED OUT BY ONE OF ITS 'SOLDIERS', BRITISH PM DEFIANT

The Islamic State terror group says the attack on the British parliament in London was carried out by one of its “soldiers”.

The ISIS linked Aamaq news agency added in a statement, the person carried out the operation in response to calls for targeting citizens of the U.S. led coalition against ISIS.

In Britain’s House of Commons today, Prime Minister Theresa May delivered a defiant message saying “we are not afraid”. She also offered thanks to allied nations. 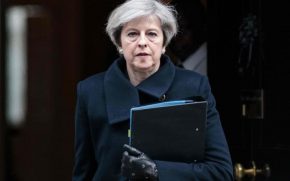 “Mr. Speaker, this was an attack on free people everywhere, and on behalf of the British people, I would like to thank our friends and allies around the world who have made it clear that they stand with us at this time,” May told British lawmakers.

A man drove an S-U-V into pedestrians on Westminster Bridge, killing two and injuring more than 30 others. He then fatally stabbed a police officer on Parliament’s grounds before being killed by police.

The attacker is described as a British National who was known as a periphery figure to police. There have been seven people arrested in connection with the attack.

A candlelit vigil is planned in London’s Trafalgar Square this evening.