THIEN UP FOR ANOTHER MAJOR LITERARY PRIZE

Vancouver-born Madeleine Thien’s Chinese-Canadian journey Do Not Say We Have Nothing is among the books on the short list for the International Women’s Prize for Fiction. 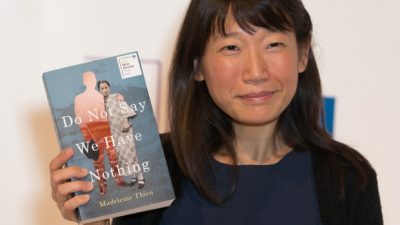 Set in China before, during and after the 1989 Tiananmen Square protests, Thien’s novel was among the most acclaimed Canadian titles of 2016.

The Montreal-based writer was awarded last year’s Scotiabank Giller Prize and the Governor General’s Literary Award for fiction…. and made the short list for the prestigious Man Booker Prize.

Other contenders for the International Women’s Prize include C.E. Morgan’s multi-generational Kentucky epic The Sport of Kings – as well as Naomi Alderman’s gender role-reversal thriller The Power.

Also on the short list for the $37,000 award  are Nigerian writer Ayobami Adebayo’s tale of love and loss in 1980s Nigeria, Stay With Me;  British author Linda Grant’s The Dark Circle, set in a tuberculosis sanatorium after the Second World War – and British novelist Gwendoline Riley’s portrait of a toxic marriage, First Love.

The prestigious prize was founded in 1996 and is open to female English-language writers from around the world.