It’s status quo in the House of Commons after yesterday’s five federal by-elections.

The governing Liberals have held on to each of their seats in Montreal, Ottawa and the GTA riding of Markham-Thornhill, where Mary Ng is the new Member of Parliament. 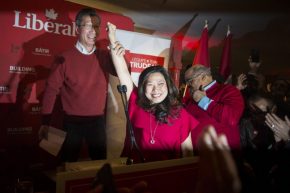 “I think I’m elected here tonight because the voters have heard the things that we are doing in the Liberal government for people, for the middle class and that’s the vote of confidence that I have from them tonight,” Ng told reporters at her victory party.

As for the criticism that she is a parachute candidate, who does not living in the riding, Ng promises to address that issue. Ng took a leave of absence from the Prime Minister’s office to run in the by-election.

The Conservatives kept both of their seats in Calgary, including the riding most recently held by former Prime Minister Stephen Harper.

And with four of the five seats won by women yesterday, it means there will now be 92 women in the Commons, representing 27 per cent of the available seats.

Overall, the Liberals have 183 of the 338 seats, the Tories have 99, the NDP has 44 and the Bloc Quebecois, 10. There is one Green Party member and one Independent.

Turnout for yesterday’s by-elections ranged from over 33 percent in Calgary Heritage to 27.5 percent in Markham-Thornhill.