Members of the United Nations Security Council are meeting today in an emergency session in Brussels to discuss yesterday’s apparent chemical attack in Syria, as world leaders continue to voice condemnation. 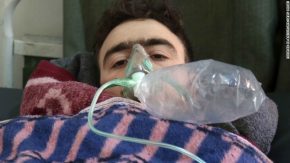 Prime Minister Justin Trudeau tweeted last night, “Canada strongly condemns the use of chemical weapons. The perpetrators of the horrific attack in Syria must be held accountable.”

“There’s no excuse whatsoever for the deliberate attack on civilians and on children,” Netanyahu said.

“There can be no future for Assad,” said British Prime Minister Theresa May, “in a stable Syria which is representative of all the Syrian people.”

The Syrian government of Bashar Assad is suspected in the assault that has killed at least 72 people and left residents gasping for air in the streets of a rebel held town in northern Syria.