Foreign ministers from the Group of Seven industrialized nations, including Canada’s Chrystia Freeland, are meeting today in Lucca, Italy. It’s a gathering that’s become more urgent because of last week’s chemical attack in Syria and the U.S. military response.

Ministers are hoping to come up with a solution to pressure Russia to end its support for Syrian President Bashar Assad.

Last week’s nerve gas attack in a rebel-held town that killed more than 80 people was followed by U.S. President Donald Trump’s decision to strike for the first time at Assad’s forces. 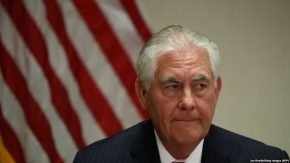 The former Exxon Mobil will also travel to Moscow this week, apparently to repair the significant damage that last week’s U-S missile attack on Syria has done to relations with Russia.