TRUMP AND PUTIN SCHEDULE ANOTHER PHONE CALL, AS RUSSIA CONTINUES TO BACK U.S. ENEMY ASSAD 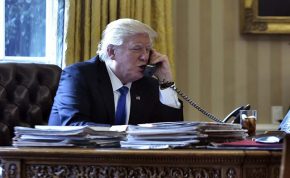 There was not an immediate response from The White House to questions about the expected topics of the conversation, but the civil war in Syria and Putin’s continued backing of Syrian President Bashar Assad loom large.

Trump said last month that U.S.-Russian relations “may be at an all-time low.” It was a reversal from the rhetoric during his campaign, when Trump said he hoped he and Putin could work together in the fight against terrorism.

Trump and Putin have spoken several times since Trump’s election, including last month following an attack in St. Petersburg, which Trump condemned.

FBI and congressional investigations continue into the Trump campaign’s contacts with Russia and Russia’s meddling in the U.S. election.