More fallout from the firing of FBI director James Comey. 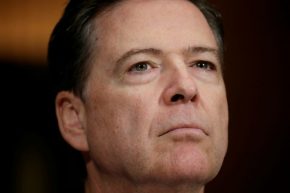 U.S. House Minority Leader Nancy Pelosi is threatening to use a parliamentary manoeuvre to force a vote on a bill, that would create an independent panel to investigate possible contacts between the Trump campaign and Russian officials.

Pelosi says Democrats will file what’s known as a discharge petition, if Speaker Paul Ryan does not call up the legislation immediately upon their return next week.

The House is on recess this week.

A discharge petition allows a measure to be brought straight to the floor, bypassing consideration by committee.

But successes are rare through this approach because a majority of House members must sign the petition.

Pelosi says the fireworks at the Department of Justice demand that they remove the investigation from the Trump-appointed Justice Department leadership.

Other developments, three U.S. officials say the fired FBI director told lawmakers he asked the Justice Department for more money for the investigation into Russia’s election meddling.
The department denies such a request was made.
Meanwhile, the White House says Trump had considered firing Comey ”since the day he was elected.”
Spokesperson Sarah Sanders says the president had lost confidence in the FBI director and acted on the advice of the deputy attorney general and others when he decided to fire him.