AYKROYD ABOARD "A WORLD WITHOUT CANADA"

Canadian comedic actor Dan Aykroyd has singed on to narrate a new original documentary series called “The World Without Canada.” 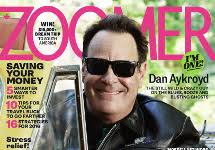 The 64-year old Aykroyd, who was born in Ottawa, and appeared on the cover of Zoomer Magazine in January of last year says the project apologetically showcases Canadian accomplishments through an eye-opening lens where Canada doesn’t exist.

The three-part documentary looks at this country’s influence and innovations, focusing on natural resources, technological and medical breakthroughs and humanitarian efforts.

Data Scientist and Futurist Juliette Powell and sci-fi author Robert Sawyer and historian David O’Keefe are featured in the programme.