METROLINX SETS UP BACKUP DEAL FOR EGLINTON CROSSTOWN CARS IF BOMBARDIER FAILS TO COME THROUGH: REPORTS

They’re not taking any chances at Metrolinx.

It is widely reported this morning that the regional transit agency has a backup deal in place if Bombardier fails to come through with promised cars for the Eglinton Crosstown. 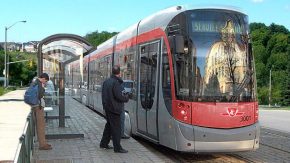 Published reports say Metrolinx has agreed to purchase 61 light rail cars from French manufacturer Alstom and at least part of the work will be done at a Toronto area plant. These vehicles can be used if necessary to open the $5.4 billion Eglinton Crosstown as scheduled in 2021.

The vehicles for the Crosstown, as well as several other lines, are supposed to be built by Bombardier Transportation under a $770-million deal dating to 2010. But Bombardier has been slow to produce functioning prototype vehicles and management at Metrolinx is no longer confident the remaining vehicles will be ready in time.

If Bombardier comes through, the Alstom vehicles would be used on the Finch and Hurontario LRT lines. Details of the Alstom deal are expected to be officially announced later today.