It’s good news as we prepare for near 30 degree temperatures tomorrow and Thursday.

TTC subway riders are being reassured that there will be no repeat of the dreaded “hot car” phenomenon this summer and faulty air conditioning units that heated up cars on the Bloor-Danforth Line 2 subway last summer are fixed. 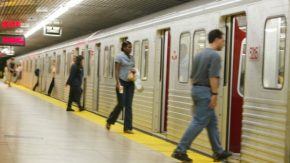 During the hottest months of 2016, the air conditioning on many subway cars on line 2 stopped working turning the daily commute into a sweaty, uncomfortable ordeal.  Mayor John Tory drew attention to the problem last summer when he took a rider up on her offer to sit on the subway from Kennedy to Kipling on a hot day. He quickly acknowledged the problem and promised a fix for the summer of 2017.

According to the TTC, crews have rebuilt the heating, ventilation and air conditioning units on 151 of Line 2’s 370 cars and repaired the units on 63 more.

TTC spokesperson Brad Ross says in an email that “the fleet is old so there may be the occasional hot car but we have a plan to remove trains with hot cars when that happens.”