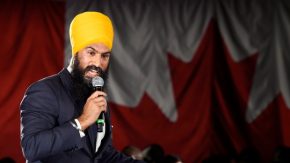 The 38 year old lawyer told supporters at his campaign kickoff in Brampton last night that the values that guide him today are progressive, social democratic values rooted in his experiences growing up.

Singh was born in Toronto to Punjabi parents, and said while growing up in Newfoundland & Labrador and in Windsor, he was bullied because of his name, skin and hair.

Singh was named deputy leader of the Ontario NDP in 2015 and says he won’t resign his seat as MPP for Bramalea-Gore-Malton while he runs for the leadership of the federal New Democrats.

New Democrats select their new leader this Fall while the Federal Conservatives choose a new leader on May 27th. Conservative leadership candidate Michael Chong joins Zoomer Radio’s Fight Back with Libby Znaimer this afternoon at 12:40.