The Trudeau Liberals have agreed to support a Senate bill that would establish Magnitsky-style sanctions against human-rights abusers in Russia and around the world. It’s a move that follows similar steps taken in the United States and Britain. 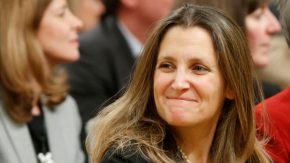 Foreign Affairs Minister Chrystia Freeland made the announcement in the House of Commons last night.

MPs will begin debate on this tomorrow. A spokesperson from the Russian embassy in Ottawa denounced the federal government’s announcement, calling it “an unfriendly move which will surely damage bilateral relations and will not be left unanswered.”

Sergei Magnitsky died in a Moscow prison in 2009 after accusing officials of tax fraud.

After the Obama administration enacted its Magnitsky Act in 2012, Russian President Vladimir Putin responded with a law that banned American citizens from adopting Russian children.