With his presidency under siege at home, U.S. President Donald Trump heads out today on his first international trip since taking office. 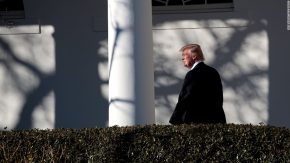 But the question hanging over the trip is whether the controversies will follow him overseas during his visits to Saudi Arabia, Israel, Italy and Belgium.

Analysts says leaders may be wondering about the president’s staying power, whether they should invest energy in forging a relationship with him and whether they can trust his promises.

Trump told White House reporters yesterday, he personally had no connections to Russia during his election campaign and the FBI probe of the issue is taking away from important issues.

“We have to get back to running this country, really really well,” Trump explained.

Trump’s comments at the White House came as Justice Department Deputy Attorney General Rod Rosenstein briefed the entire senate in private at the Capitol. It was Rosenstein who appointed a special counsel in former FBI director Robert Mueller to independently lead a Trump-Russia investigation.