Prime Minister Justin Trudeau says Canadians “are shocked by the news of the horrific attack in Manchester” as it’s still being determined if any Canadians have been affected. 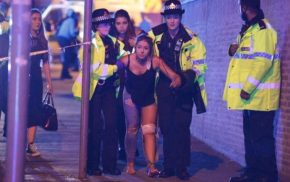 Trudeau issued a statement late last night after the death toll from the terror attack was raised to 22 and 59 injured in an explosion set off by an apparent suicide bomber just outside the arena where people were leaving an Ariana Grande concert. Manchester Police said earlier they had arrested a 23 year old man in south Manchester in connection with the attack.

The Islamic State Terror Group says one of its members planted ‘bombs’ in the middle of crowds in Manchester.

This morning, British Prime Minister Theresa May spoke outside her offices at 10 Downing Street.

“The threat level remains at severe. That means a terror attack remains highly likely but the Independent Joint Terrorism Analysis Centre which sets the threat level at the basis of the intelligence available to them, will continue to assess this throughout today and in the days ahead,” May explained.

Campaigning has been suspended in Britain’s national election after the attack. Britons are due to go the polls June 8th.

U.S. President Donald Trump is expressing solidarity with the United Kingdom in the wake of the deadly explosion in Manchester, condemning the “evil losers” behind the blast.

Trump says the attack preyed on “innocent children.” He says this “wicked ideology must be obliterated. And I mean completely obliterated.”