The changing of the guard ceremony at Buckingham Palace has been cancelled so that police officers can be re-deployed in the wake of the Manchester concert attack Monday night. The traditional ceremony at the palace in London is a major attraction that draws crowds of tourists. UK Home Secretary Amber Rudd reassures that the measure does not reflect a lack of armed police officers. 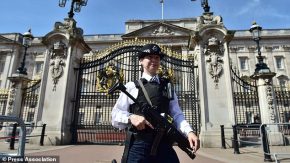 Tourism is also being affected at the Palace of Westminster, which houses the British Parliament in London. It will be closed to all without passes and all tours and events at Parliament have been cancelled.

The changes come after Britain’s national security threat level was raised to the highest level of critical.

They say the arrests had been made in the south of the city, where a day earlier a 23-year-old man was also arrested and a number of homes were searched.

The number of injured in the attack has been raised to 119, with 64 people still hospitalized. A Manchester health agency spokesperson says the number of overall wounded was raised to to the walking wounded who came in hours after the attack.

Police are trying to establish if bomber 22 year old Salman Abedi, a British citizen of Libyan descent, acted alone or whether there could be a risk of further attacks.

Here in Toronto, heightened security is planned for the Air Canada Centre where Canadian superstar The Weeknd is scheduled to play back-to-back shows this weekend. Other international stars such as the Chainsmokers and Neil Diamond are slated for the coming weeks.

Air Canada is also warning passengers of additional delays at Pearson Airport because of heightened security.