Legendary actor Robert De Niro says he may be in Toronto more often since he’ll have his own unit in a new luxury condo development in the city.

He’s joining with celebrity chef Nobu Matsuhisa and others to build Nobu Toronto; a complex with 660 condominium suites, a hotel and the first Nobu restaurant in Canada. De Niro calls Toronto a perfect location for the development. 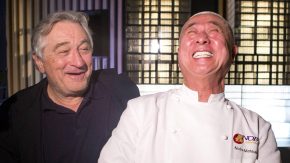 “Toronto’s a great city, it’s got a great film festival and there are things about Toronto I don’t even know about, but I’m sure if I’ve spent enough time here, I’ve shot here from time to time,” mused De Niro.

The condo units start at about $400,000 but the most expensive ones will go for as much as $2-million.

The group behind the star-powered project aims to break ground on the development next year. They dismissed suggestions that the development might be ill-timed if the market starts to falter.