The capital of Afghanistan has suffered one of the worst attacks since the drawdown of foreign forces in late 2014. 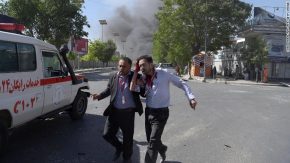 A massive suicide bombing in Kabul this morning has left at least 80 people dead and some 350 wounded.

It happened in a highly secure diplomatic area of the Afghan capital near a busy intersection in a neighbourhood considered Kabul’s safest. Several foreign embassies are located nearby, including Canada’s, Britain’s and Germany’s.

There has been no report of casualties or damage at the Canadian Embassy. But German, Pakistani and Japanese authorities report several injured staff members, China and Turkey report damage to their embassies, and the BBC says a driver with its Afghan Service was killed and four of its journalists were injured.

No group has immediately claimed responsibility for the bombing but both the Taliban and the Islamic State terror group have staged large-scale attacks in the Afghan capital in the past.