Toronto police say they’re investigating the possibility that a gigantic fire last  month at a waterfront recycling facility – was caused by fireworks. 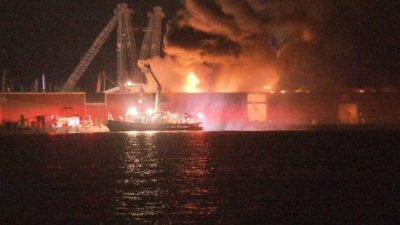 The early morning fire sent a haze of smoke drifting over parts of the city – and firefighters were at the scene for several days before the blaze was put out.

Police say damage is estimated to be as high as $20 million.

In a release today – investigators say security camera video shows fireworks being launched from an area adjacent to the building – just before the fire broke out.

Police say the video shows some of the fireworks landing on the recycling facility – and a black pickup truck and a white sedan were seen driving away from the area.