Canada’s Come From Away has won three Drama Desk Awards, including outstanding musical.

The 9/11-inspired production set in Gander, Newfoundland was awarded the top prize at a ceremony held at New York’s Town Hall last night.

Canadian husband and wife duo Irene Sankoff and David Hein, the co-creators of Come From Away, won outstanding book of a musical. 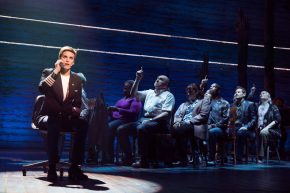 Now in its 62nd year, the Drama Desk Awards are billed as the sole major New York theatre honours where Broadway, off-Broadway and off-off-Broadway productions compete in the same categories.

Broadway’s biggest prize could still be in store for the Canadian musical when the Tony Awards are handed out this coming Sunday. Come From Away has been nominated for seven Tonys, including best musical.