GLEN CAMPBELL 'HAPPY' WHILE IN LATE STAGES OF ALZHEIMER'S: DAUGHTER 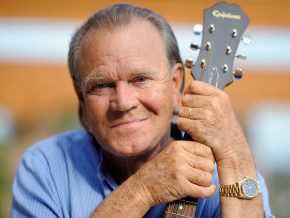 Ashley Campbell says many people in the late stages of Alzheimer’s are confused and scared, but that’s not the case with her father.

“He’s lost his ability to communicate…but he is doing so much better than a lot of people in his position. Instead of being scared and confused all of the time, he’s just happy and loves being around people and enjoys his desserts and all of that,” she explained.

Ashley says she will sometimes play him a song or play music on the radio, and he doesn’t always realize he’s hearing music. But she says if he’s in the right head space, he’ll close his eyes and tap his toes, or even sing along, even though he will sing a different song.

79 year old Glen Campbell is being cared for in a long term care facility in Nashville.