London police investigators say the death toll in Wednesday’s high-rise apartment building fire in London’s west end has risen to 17 and is likely to rise even further.

Queen Elizabeth and her husband Prince Philip have paid tribute today to London firefighters whose bravery prevented a greater loss of life in the deadly inferno. 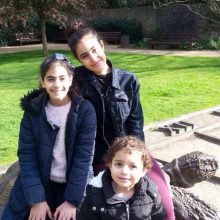 (Mirna, Fatima & Zainnb are among those missing)

More than $1.2-million has been raised to help victims of the tragedy as volunteers and charities worked through the night to find shelter and food for people who lost their homes.