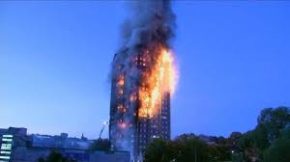 Metropolitan Police Commander Stuart Cundy updated the media this morning confirming the new death toll.  He added that 24 other victims are being treated in hospital with 12 still in critical condition.

The number of dead is expected to rise further as the investigation into the fire continues.  Commander Cundy says he hopes it won`t rise to three figures.

Authorities say they’ve examined the original location of the fire and there is no indication it was started deliberately.

Queen Elizabeth and and Prince William joined community groups at the site this morning, helping those affected by the tower fire disaster.