British Police are investigating what they suspect is another terrorist act in London.

It was just after midnight on Monday morning when a van struck pedestrians near a mosque, leaving one man dead and 10 people injured. 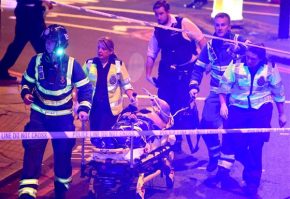 The crash occurred as Muslims were leaving the Finsbury Park Mosque after Ramadan prayers. A 48 year old man has been detained by police.

British Prime Minister Theresa May says extremism in London has been on the rise in recent years.

“It is why we will be reviewing our counter-terrorism strategy and ensuring that police and security services have the powers they need,” May said in front of 10 Downing Street, “And it is why we will establish a new commission for countering extremism, as a statutory body to help fight hatred and extremism in the same way that we have fought racism.”

London Mayor Sadiq Khan condemned the attack as an assault on tolerance, freedom and respect.

It was earlier this month in London, knife-weilding terrorists killed 8 people and wounded 48, after driving a van into unsuspecting people on the London Bridge and then going on a stabbing spree in nearby Borough Market.