It’s disappointing news for fans of the legendary Queen of Soul. 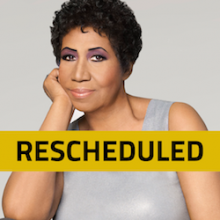 75 year old Aretha Franklin has pulled out of a scheduled Canada Day concert at Toronto’s Sony Centre for the Performing Arts due to health issues.

A statement from the Toronto Jazz Festival says Aretha is unable to travel to Toronto this week “as per doctor’s orders.”

The statement says Franklin will instead perform at the Toronto Jazz Festival next year on June 28th.