Michael Buble says he is humbled by the love and support from his fellow Canadians during what has been an emotionally tough time for his young family. 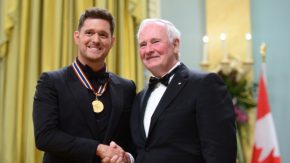 The 41 year old crooner from British Columbia was in Ottawa yesterday to receive a medal from the 2017 Governor General’s Performing Arts Awards.

It was the first public event for Michael Buble since announcing last fall that his three-year-old son, Noah, is receiving treatment for cancer.

He expressed pride in representing Canada on world stages.

“Let me first say that I can’t tell you how humbled this tremendous honour makes a huge Canadian icon like myself feel,” Short joked in acceptance.

A gala for the Governor General’s Performing Arts Awards will be held Thursday night.