A PLEASANT SURPRISE AT THE PUMPS FOR CANADA DAY WEEKEND

Canadians taking to the road for the country’s 150th Canada Day weekend –  are expected to see the lowest average gasoline prices in seven years –  according to GasBuddy.com – which tracks the retail price of fuel. 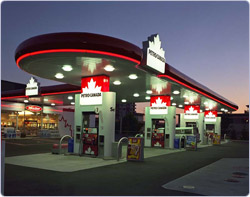 Senior petroleum analyst Dan McTeague says the prices are a welcome relief – after years of summer price increases – and “put to rest the myth” that gas prices always go up for the holidays.

The reason for the lower fuel prices?

Michael Ervin, a fuel market analyst with the Kent Group – says it’s mainly because North American refineries are paying less for oil – and refinery production has been strong – which allows gasoline inventories to build –  preventing an imbalance in supply and demand – that might force prices higher.