MARRIAGE "SHOOTS" TO A DUBIOUS START

This is probably not the text book start most newly-weds expect. 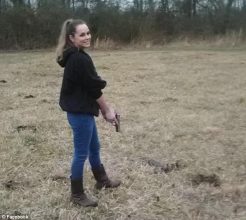 Just hours after her ceremony, a Tennessee bride (shown here in a Facebook post) apparently pulled a 9 mm handgun out of her wedding dress, pointed it at the man she’d just married and pulled the trigger.

Fortunately for hubby, Kate Prichard’s gun wasn’t loaded.  But she then apparently did load it, fired a shot into the air and sent wedding guests into a frenzy.

Guests report Prichard had been drinking.  She’s been released from police custody on bail