Watch out for this plant. 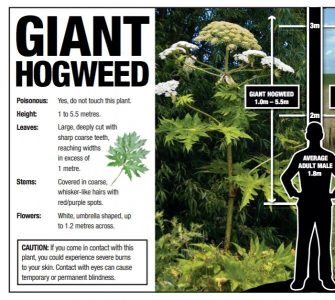 The Nature Conservancy of Canada is asking people to document sightings of Giant Hogweed – a towering, three-metre high green plant – with large white flowers – which has been spreading in southern Ontario and elsewhere in Canada.

The plant’s clear sap can cause blistering third-degree burns – if it touches the body – and is then exposed to the sun – through a photo-toxic reaction.

It can also cause permanent blindness – if the sap comes into contact with the eyes.
Todd Boland, a research horticulturalist at Memorial University’s Botanical Garden in St. John’s, Newfoundland, says simply touching the plant is not dangerous. It’s the sap that’s problematic and washing your body and clothes after exposure can prevent the phototoxic reaction.
Giant Hogweed is often mistaken for similar-looking Cow Parsnip – and can be found growing in gardens, along roadsides, in ditches and on the shores of rivers and streams. The conservancy is asking people to document sightings of the invasive plant through apps such as “i-Naturalist.”