FREELAND PRIORITIZES LABOUR AND ENVIRONMENT FOR THIS WEEK'S NAFTA TALKS

Foreign Affairs Minister Chrystia Freeland is laying out some of Canada’s priorities for the upcoming renegotiation of the North American Free Trade Agreement.

She says Ottawa also aims to cut down on bureaucracy and harmonize regulations to ease the flow of cross-border business.

Freeland says Canada will also seek to maintain key elements of the 23-year-old deal including the process to ensure anti-dumping and countervailing duties are only applied when truly warranted.

She says Ottawa will also press to preserve the exception in NAFTA to protect Canadian culture and the supply management system. 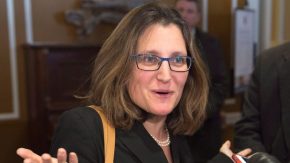 As for U.S. President Donald Trump, he continues to express concerns with NAFTA.

“NAFTA’s been a catastrophe for our country, it’s been a catastrophe for our workers, and our jobs and our companies that are leaving our country. I want to change it and maybe we do a new NAFTA and we put an extra F in the term NAFTA. Do you know what the extra F is for right? Free and fair trade, not just fair trade,” Trump explained to reporters.

Trump is also tweeting about NAFTA on Monday morning, saying “The Obstructionist Democrats have given us (or not fixed) some of the worst trade deals in World History. I am changing that fast!”