As excitement builds about the August 21st solar eclipse – experts are urging people to take good care of their eyes.

Ralph Chou – a University of Waterloo optometry professor and president of the Toronto Centre of the Royal Astronomical Society of Canada – reminds people that staring at the sun for more than a few seconds will cause harm. 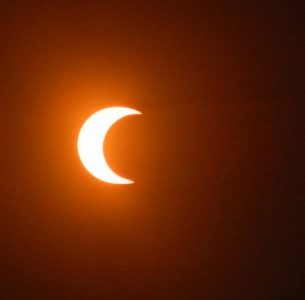 He says because the eye feels no pain it’ll be too late to look away from potential retina-burning solar rays – before a viewer realizes they’ve done potentially permanent damage.

And Chou says sunglasses aren’t adequate for direct viewing of an eclipse – because they allow in thousands of times more sunlight – than is safe for your eyes.

According to NASA special solar eclipse glasses should be marked on the label with the “ISO 12312-2” international safety standard.

Those glasses are relatively cheap but they’re becoming hard to find – as the Monday event approaches.

Here in the Toronto area we’ll see about 70 percent of the sun eclipsed by the moon – by 2:32 on Monday afternoon.