He represents the Collingwood Elvis Festival, sponsored by Zoomer Radio. Now, Gordon Hendricks is the winner of the 2017 Ulitmate Elvis Tribute Artist Contest as decided by Graceland – the home of Elvis Presley. 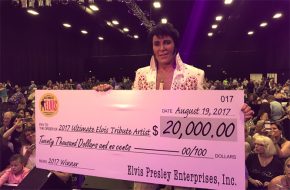 For his incredible impersonation of Elvis, Hendricks has received a contract to perform with Elvis Presley Enterprises, the 2017 Ultimate Elvis Tribute Artist Contest Belt, and a cash prize of $20,000.

Hendriks is from Stoke-on-Trent, Staffordshire, England and was a barber who became known as the “Singing Barber of Stoke” before becoming an Elvis tribute artist. He says he became a fan of Elvis as a child and loves paying tribute to the king. His favourite Elvis song is American Trilogy.