ARTIST ENFORCES COPYRIGHT ON PEPE THE FROG BEING MISUSED BY RACISTS 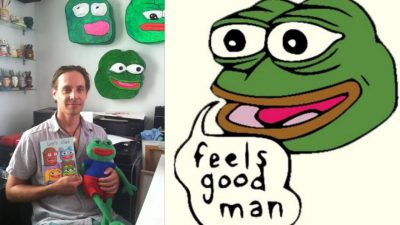 The creator of a cartoon frog – that was illegally appropriated by white racists – has forced a Texas man to stop distributing a children’s book based on the character – Pepe the Frog.

Lawyers for artist Matt Furie say he has enforced his copyright of Pepe the Frog – and has forced former Texas educator Eric Hauser to quit distribution of his self-published book, “The Adventures of Pepe and Pede.”

Furie’s attorneys, Louis Tompros and Don Steinberg – say in a statement that the book in question was hateful, racist and Islamophobic.

Pepe the Frog made hi first appearence more than ten years ago – in an online cartoon – and has often been used by white supremacists and nationalists in online memes.

A Texas school district removed Eric Hauser as an assistant principal – after he self-published the book this summer.