Both U.S. President Donald Trump and Japanese Prime Minister Shinzo Abe are promising to increase pressure on North Korea after the regime launched a missile over Japan early Tuesday.

In a 40 minute phone call, Abe and Trump agreed to call for an emergency meeting of the UN security council to discuss the situation.

Experts in South Korea say the missile may have flown further than any other tested by North Korea. 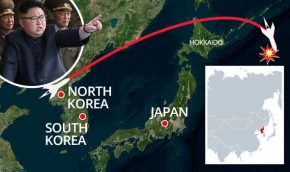 The test was one of the most provocative ever from the reclusive state and sends a clear message to Washington just weeks after leader Kim Jong-un threatened to target the US Pacific territory of Guam with similar intermediate range missiles.

The Japanese prime minister said shortly after his phone call with Trump that the U.S. is “100% with Japan.”