After five days of torrential rain, the latest weather forecast for Houston predicts less than an inch of rain, or about 20 millimetres, and maybe even some sunshine.

But the dangers are far from over. Authorities and family members have reported at least 18 deaths from Harvey, with some 13,000 people rescued in Houston and in surrounding cities and counties.

Houston’s Mayor Sylvester Turner also implemented a curfew of midnight to 5 a.m. in an apparent response to scattered reports of looting.

Two additional shelters, The Toyota Center and NRG Park have opened to house displaced residents. Louisiana’s governor also offered to take in Harvey victims from Texas, and televangelist Joel Osteen opened his Houston megachurch, a 16,000-seat former arena, after critics blasted him on social media for not acting to help families displaced by the storm.

Tropical storm Harvey came inland early Wednesday near the Texas-Louisiana border, after drifting back into the Gulf. 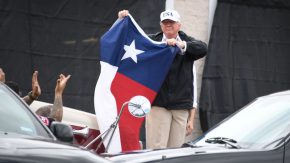 U.S. President Donald Trump meantime, has answered Harvey’s wrath by offering in-person assurances to those in the storm zone that his administration will work tirelessly to help the region recover from the massive flooding and storm-inflicted destruction.

He climbed a fire truck and spoke to locals in Corpus Christi, Texas.

“We’re here to take care, it’s going well, and I want to thank you for coming out. We’re going to get you back and operating immediately. Thank you everybody. What a crowd, what a turnout,” Trump called out.

The president kept his distance from the epicenter of the damage in Houston to avoid disrupting recovery operations. And he plans to return to the region Saturday to survey the damage and meet with some of the storm’s victims.