UNIVERSITY OF TORONTO COMES IN AT 22 IN WORLD UNIVERSITY RANKINGS, STILL NUMBER ONE IN CANADA

As a new school year gets underway, the University of Toronto, UBC and McGill have held steady in making the top fifty in the annual publication of worldwide institutions. 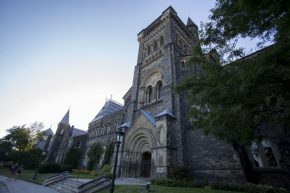 U of T won the top place in Canada at number 22, while the University of British Columbia moved up two spots to retake its 2015 position at number 34 and Montreal’s McGill University remained at 42.

But the good news comes with a caveat. There is indication from the Times Higher Education World University Rankings that Canadian universities will need to bolster their investment in research if they want to keep up with intensive global competition in post secondary education.