Doug Ford all but declared on Zoomer Radio’s Fight Back with Libby Znaimer, that he plans to run against John Tory for Toronto’s mayor next Fall. 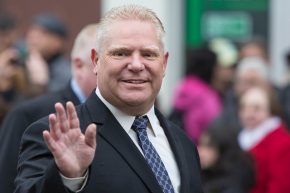 The brother of the late former Mayor Rob Ford has been teasing voters by saying he will declare whether he’s running municipally or provincially at tomorrow night’s Ford Fest barbecue event in Etobicoke. But his conversation with Libby revolved almost entirely around municipal politics, during which he accused Mayor Tory of getting nothing done. Listen here.

“He’s a do-nothing mayor. No one can answer than question, what has he done? I’ll give you two pages of what we accomplished in the first couple of years and we gave them coffers that were full. We gave them a surplus, and he’s drained the surplus, drained all of the reserves out of every single department,” Ford complained.

Toronto City Councillor Shelley Carroll refutes Ford’s allegations of fiscal mismanagement while Tory’s been mayor. She told Fight Back, it’s because of Doug and his late brother that the city ended up “intractably stuck” developing the Scarborough subway instead of Light Rapid Transit. Listen here.

Doug Ford lost to John Tory in the 2014 mayoral election, after brother Rob resigned from the race to receive cancer treatment.