These include tax reform, the $10.5-million payout to Omar Khadr and asylum seekers illegally heading over the border to Quebec. 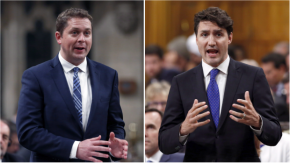 “Canadians are proud to do our share to help the world’s most vulnerable and offer protection to those facing persecution and violence, but you know, I’ve been to upstate New York and I’ve been to North Dakota, those places are safe,” Scheer said to his MPs to laughter, “Yet on Trudeau’s watch, thousands have walked in encouraged by his irresponsible comments that everyone will be welcome when he knows it’s not true.”

Speaking during the party’s two-day strategy meeting in Winnipeg yesterday, Scheer promised to hold the government to account on all issues.

Speaking after the Liberals’ caucus retreat in Kelowna B.C. yesterday, Trudeau said Canadians embrace immigrants precisely because they have faith in the integrity of the system.