Hurricane Irma has weakened to a Category 1 storm, and as of 5am, was centered to the northeast of the Tampa Bay region of Florida.

The hurricane’s maximum sustained winds have weakened to 120 kilometres an hour with additional weakening expected as it heads north. 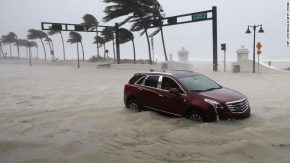 The powerful storm has left some 5.8 million homes and businesses in Florida without power.

The Trudeau Liberals in Ottawa are sending a team to the Caribbean to determine what assistance Canada can provide to victim of hurricane Irma.

Among the tools that the government will use is its Disaster Assistance Response Team, made up of members of the military and diplomats, which can go anywhere in the world on short notice.

Toronto-based aid Global Medic has sent four people to storm-battered St. Maarten to deliver supplies to those affected by Irma.

Another 50-flights to the Caribbean have been cancelled this morning out of Pearson Airport. This is in addition to the many flight delays and cancellations over the weekend. The Greater Toronto Airports Authority reports normal operations on Monday but advises anyone planning to fly south to check their flight status before heading to the airport.