Toronto physician Dr. Danielle Martin is making headlines once again in the U.S.

The family doctor played a starring role at a Washington event Wednesday held by Senator Bernie Sanders to help sell his single-payer plan.

Some of the Sanders devotees sitting in the packed room on Capitol Hill nodded appreciatively as she spoke of the benefits of Canada’s health care system. 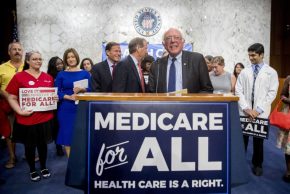 “Ninty-four percent of Canadians say that our healthcare system is a source of personal and collective pride, even more than ice hockey,” Martin said to appreciative laughter, “Single payer healthcare is a symbol to us of what it truly means to be Canadian, that we take care of each other.” See Dr. Martin’s full video statement here.

Doctor Martin came to the senator’s attention with the moment that made her an internet sensation.

Testifying before a Sanders-chaired U.S. Senate committee in 2014, Martin trounced an ill-prepared Republic senator who peppered her with negative questions about Canadian care. The video has been viewed millions of times while Sanders’ aides kept in touch with her and invited her back to Washington for his big day.

Sanders extolled Canada’s single payer system in a New York Times op-ed Wednesday morning and then at his rally in the afternoon.