Prime Minister Justin Trudeau has waded into the Myanmar crisis.

Trudeau phoned Myanmar’s beleaguered leader Aung San Suu Kyi on Wednesday to press her on the violence against Rohingya Muslims in her country and the resulting mass exodus of the ethnic minority.

Nearly 380,000 Rohingya have fled to Bangladesh since August 25th, saying they are being shot at indiscriminately by Myanmar soldiers and attacked by Buddhist mobs.

During their phone call, Trudeau is said by the Prime Minister’s Office to have expressed “deep concerns” to Suu Kyi over the treatment of Rohingya. He also stressed her role as a moral and political leader, even though she does not have the constitutional authority to control the military. And the Prime Minister offered Canada’s support to help build a peaceful and stable society in Myanmar. 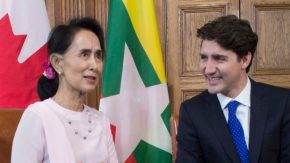 The conversation comes three months after Trudeau and Suu Kyi met in Ottawa to raise the plight of Rohingya Muslims.

The Rohinga have faced decades of discrimination and persecution in Buddhist majority Myanmar, where they are denied citizenship despite centuries-old roots in the country.