Peter Munk says his donation to a Toronto heart hospital is a repayment of his debt to Canada for taking in his family after World War Two. 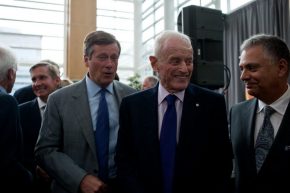 The philanthropist has announced a $100-million donation to the Cardiac Centre which is named after him, at Toronto General Hospital.

In a long and impassioned speech, the founder and former chairman of Barrick Gold Corporation on Tuesday extolled the Canadian graciousness he was shown when he emigrated here in the late 1940s. Munk was born in Hungary. He told an audience, Canada opened the door and gave him and his family everything, referring to this country as paradise.

Munk also explained that he wants Toronto to be a beacon of innovative health care.

The historic gift, the largest ever to a Canadian hospital, will be invested in efforts to optimize the quality of care and improve health outcomes for those struggling with cardiovascular diseases.