BOMBARDIER SLAPPED WITH HEFTY DUTIES BY U.S. IN TRADE DISPUTE WITH BOEING

Bombardier’s hopes for breaking into the U.S. commercial aviation market have taken a massive hit. 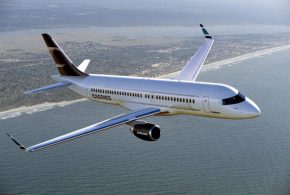 Acting on a complaint from Boeing, the U.S. Department of Commerce has slapped Bombardier with a 219 percent duty on its C-Series jets.

It’s a preliminary decision that claims the Montreal-based company benefited from improper government subsidies, which gave it an unfair advantage when selling stateside.

“This is an injust punitive ruling and the Government of Canada is very very strongly opposed to it. I think that’s probably worth mentioning that preliminary determinations by Commerce are almost invariably in favour of the U.S. company raising the issue,” explained Freeland to reporters.

Boeing lodged a complaint after Bombardier secured a deal for up to 125 of its C-S100 jets with Delta Air Lines in April 2016.

Speaking prior to the ruling, Prime Minister Justin Trudeau promised to continue to stand with Bombardier and again threatened to cut government ties with Boeing.