There have been four pedestrian deaths in Toronto since Wednesday evening.

The most recent was Thursday night at 9:45 when a man was pronounced dead after he was hit by a vehicle while crossing mid block on McCowan Road south of Steeles Avenue. 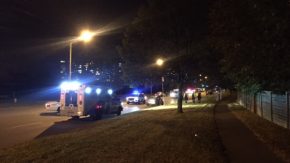 (Emergency vehicles are shown on scene after a pedestrian was fatally struck on McCowan Road south of Steeles Avenue. Photo credit: Courtney Heels)

Paramedics say the victim, believed to be in his 70s, was without vital signs and was pronounced dead at the scene.

The driver remained on the scene and is said to have performed CPR on the victim.

Earlier in the day, a man in his 50s was struck and killed in the area of Birchmount and St Clair in Scarborough at about 4:30. One person was taken into custody.

And on Wednesday night at about 9 o’clock, a mother and her five year old daughter were struck and killed while crossing Warden at midblock near Elsemere – also in Scarborough.

Toronto Police Constable Clint Stibbe says these tragic accidents are reminders for both drivers and pedestrians.

“Drivers make sure you reduce your speed, stay below the posted speed limits, don’t drive while impaired. Individuals that crossing the street, cross at a marked crosswalk, don’t take those chances. If you think to yourself, I think I can make it, you probably shouldn’t be doing it,” explained Constable Stibbe.

It was early this year, Mayor John Tory announced plans to reduce traffic fatalities to zero, with an emphasis on protecting seniors and children.

Older pedestrians are more likely to die from their injuries.