Carbon monoxide poisoning is suspected in the deaths of two elderly people whose bodies were found in a west-end Toronto home Sunday night. 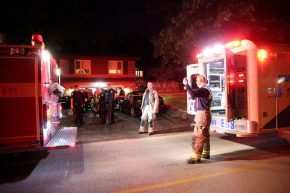 (The man and woman were found in the garage of an Etobicoke home where there was a high level of carbon monoxde. Photo credit: John Hanley)

Fire officials say high levels of the deadly gas were detected in the residence in the Kipling-Rathburn area of Etobicoke.

Police say they received a call about 2 people unconscious and not breathing from the caregiver of one of the individuals, who had gone to the home just before 9:30 Sunday night.

Paramedics said a man and a woman in their 80’s were found without vital signs, and all attempts to resuscitate them failed. A running vehicle engine can also cause carbon monoxide poisoning. Large exposure to it can cause loss of consciousness and death.

Toronto police said it is too early in the investigation to consider the incident as suspicious or not.

The coroner has been notified and a fire investigator has been assigned to determine the source of the carbon monoxide.