It is the deadliest mass shooting in U.S. history and in happened Sunday night in Las Vegas. Police say a single gunman took fire repeatedly from the 32nd floor of the Mandalay Bay Hotel down onto an outdoor music festival across the street. 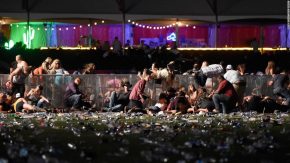 “The Clark County Fire Department is estimating the injuries to be well over 400, and the deaths associated with this event to be over 50,” Lombardo explained at 5:50am local time.

Lombardo says the shooter was killed by officers once his location was determined.

“His name is Stephen Craig Paddock…a 64 year old white man from Mesquite, Nevada,” Lombardo later explained, “We have no investigative information or background associated with this individual that is derogatory.”

A motive has not been determined.

Country music star Jason Aldean was in the middle of his performance when the shooting began. He posted on Instagram hours later, calling it “beyond horrific.”