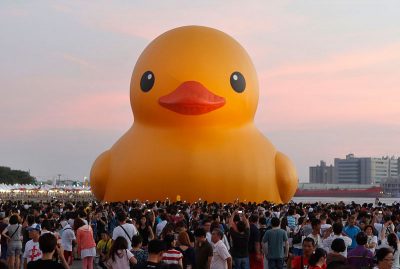 Organizers of a Toronto waterfront festival that featured a controversial giant rubber duck – say the event generated millions of dollars in economic activity.

The Redpath Waterfront Festival points to a study conducted by Enigma Research – showing that the economic impact of the festival was a record $7.6 million.

About 750,000 people attended – and the festival attributes that in part to the attraction billed as “the world’s largest rubber duck.”

The Ontario government gave the festival a grant of about $120,000 – which Opposition politicians called a “cluster duck” – and an absurd use of taxpayer dollars.

But the festival says area businesses reported record sales over that Canada Day weekend – and water taxis got a big boost in business – after a challenging summer – due to Toronto island closures because of flooding.