Toronto Police have issued a safety alert following a string of collisions around the city yesterday that sent a number of people to hospital.

Constable David Hopkinson says part of that was because of the rainy conditions.

“There’s not as much stopping distance, you have to take more space to stop your car, and the rain when it collects on the windows, it offers less visibility for the drivers, especially if they’re looking for pedestrians. The change in the weather, we’re also looking at a change in the season, so it’s darker now than a month ago…so people are not used to this, so we typically see an increase in collisions at this time of year,” explained Hopkinson to CP24.

At one point during Wednesday afternoon, police had responded to over 30 collisions since noon. 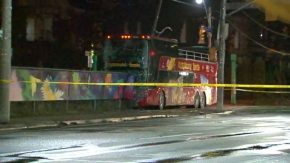 The incidents included a collision between a double decker bus and a car in Cabbagetown that sent the bus driver to hospital with serious injuries.

In Forest Hill North, a man in his 70s was seriously injured after a collision at about 8pm. At about the same time, a pedestrian was hit at Ellesmere near Kennedy. And a cyclist was struck and seriously injured in the Milliken area of Scarborough.