It was billed as the first on-street test of an autonomous vehicle in Canada. 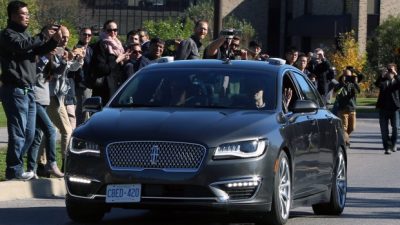 The demonstration was aided by traffic lights equipped with transmitters that communicate with the car – as well as repainted street lines and new LED street lights – installed on the test loop around the suburban technology park.

The street was closed for the public demonstration, which attracted scores of curious people – but the vehicle is eventually expected to be operating on city streets –  amidst traffic and pedestrians.

BlackBerry has been a supplier of software platforms to the auto industry for 20 years – including telematics, infotainment, acoustics, and instrument cluster systems.